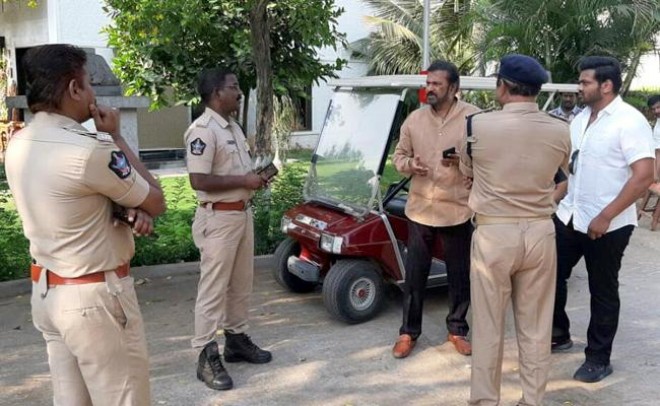 Tirupati, Mar 22: Tollywood actor and Sree Vidyanikethan colleges chief Mohan Babu has called for a protest demanding to clear the pending amount of fees reimbursement of the students.

He along with hundreds of students have conducted a protest rally in Tirupati on Friday. Before that Mohan Babu has made a tweet about the protest rally.

In the tweet he said; Wanted to take a peaceful rally today in Tirupathi protesting the non-payment of the fee reimbursement of the students by the Govt.... Police have arrived at our home in Tirupathi and looks like they are not going to allow the rally.

Responding to Mohan Babu, his son and actor Vishnu Manchu retweets saying, Father has never been a person who can be oppressed. He taught us to challenge annoyers. Why other college owners are not talking about the fee reimbursement, only they can answer. Either they are scared of the big tormentors (or) in bed with them.

During the protest rally, speaking to media Mohan Babu said that for last four and half years AP CM N Chandrababu Naidu has deceived them by not paying the fees reimbursement pending bills.

Despite, writing letters to the government, regarding Rs 19 cr pending fees reimbursement amount, but they have not even responded to it. Mohan Babu has expressed his anguish that even after writing a letter to Chief Minister they were no solution to the problem.

As the 2019 election code is active in the state, the police have not given permission for the rally. It's also said that the police have made a home arrest in Tirupati.