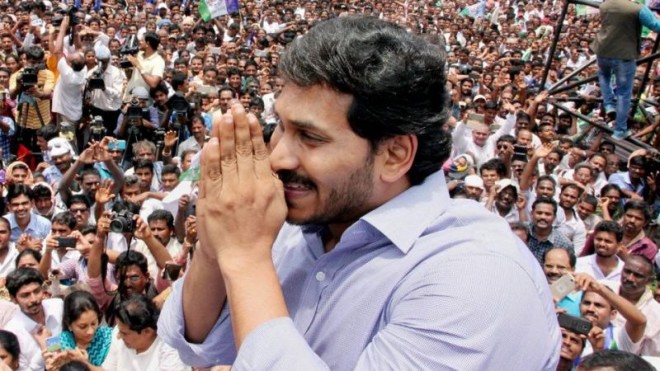 Visakhapatnam, Mar 18: YSRCP chief Y.S. Jagan Mohan Reddy, who usually attacks Chief Minister N. Chandrababu Naidu in his speeches has changed his strategy and started concentrating on explaining to the people about the schemes that he would implement if voted to power.

In the run-up to the polls, Mr Reddy has promised to formulate laws to provide 75 percent jobs to locals spanning all industries.

From the 2014 general elections to Nandyal by-elections, Reddy was seen attacking Naidu in most of his speeches. Now to make sure that all his announcements regarding his schemes reach the people, he has changed his priorities in his speeches.

Addressing a public meeting in Narsipatnam on Sunday, Mr Reddy began his speech saying "Nenu Vinnanu, Nenu Unnanu". The dialogue has become famous in recent times as it is from a popular movie 'Yatra' that was shot as a biopic of the late Y.S. Rajasekhar Reddy.

"I have walked for 3,648 kilometres and I have heard all the problems of the people. I am promising from this state that I have heard and I’m there," he said.

He said, "Before asking for your vote let me explain the schemes that I will implement soon after forming the government. My government will give more importance to farmers. I will work towards making all the poor SC, ST, BC and Minorities as millionaires. Filling all 2.3 lakh vacant jobs in the government will be taken up immediately along with giving APPSC notification every year."