People witnessed a rare 22 degree halo around the sun 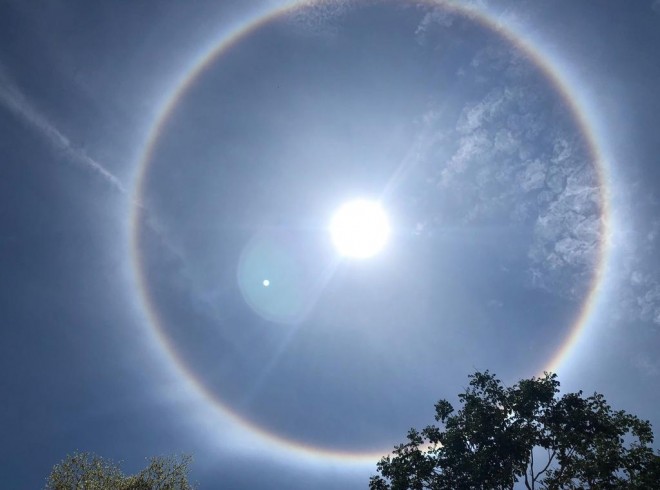 Hyderabad: The Telangana people today witnessed the rare sight of a rainbow colored ring around the sun. People are left marvelling as the halo appeared around the sun on Wednesday morning. This rare optical and atmospheric phenomenon is called 22 degree circular halo which belongs to the family of ice crystal halos. Its form is a ring with an apparent radius of approximately 22 degree around the Sun or Moon. When visible around the Moon, it is called a moon ring or winter halo.

The circular ring forms as direct sunlight or moonlight is refracted in millions of hexagonal ice crystals suspended in the atmosphere. The halo appears large its radius is roughly the length of an outstretched hand at arms length. A 22 degree halo may be visible on as many as 100 days per year much more frequently than rainbows.


The halos can appear in any season and are reported several times a year. The frequency of people reporting the illusion is usually determined by the amount of cirrus cloud coverage in any given area. Moon halos are usually seen as a bright, whitening, although sometimes they can have color, appearing like faint rainbows.

The moon dog or paraselene happens when moonlight refracts off ice crystals in cirrus clouds, high up in the Earths atmosphere. The cirrus clouds contain millions of ice crystals. The halos around the moon are caused by both refraction, splitting of light, and also by reflection, or glints of light from these crystals.

Last week Bengaluru witnessed a stunning spectacle in the sky. The halo was visible from most parts of the capital of Karnataka state from around 11 am and lasted for over an hour.