National flag on the frozen water body at 17,000 feet 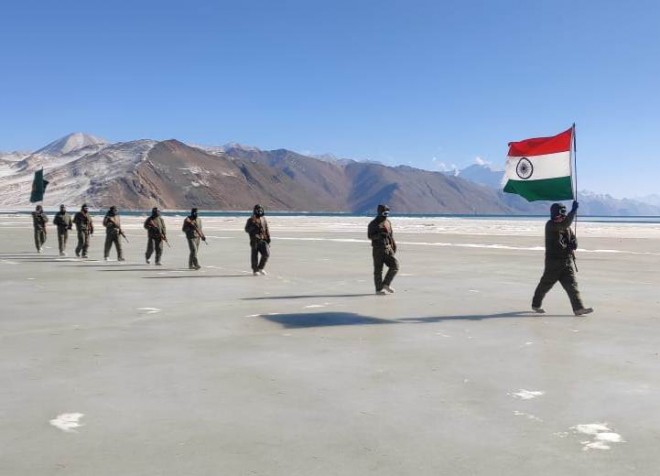 The Indo-Tibetan Border Police personnel braved inhospitable conditions in Ladakh on Tuesday when they marched with the national flag on the frozen water body at 17,000 feet above sea level to celebrate Republic Day.

The ITBP personnel, including men and women, celebrated the event as the temperature recorded minus 25 degrees Celsius. Also referred to as the ITBP Himveers, the personnel raised a full-throated cry "Bharat Mata Ki Jai" and "Vande Matram".

There was another ITBP personnel team at 14,000 feet in Ladakh, celebrating the day at the Border Out Post. In a video captured from the height, the ITBP men were seen trudging slowly through the fresh snow.

Serving the nation in the most difficult and inhospitable terrain in Ladakh, the ITBP personnel are examples of valour, commitment and patriotism.

the specialised mountain force — most of whose officers and men are trained mountaineers and skiers — guard the 3,488 km border from Ladakh Karakoram Pass to Jachep La in Arunachal Pradesh.

Republic Day celebrations are being held across the country, and the annual parade in New Delhi is the main event