Famers unions across the nation have called for a Bharat Bandh 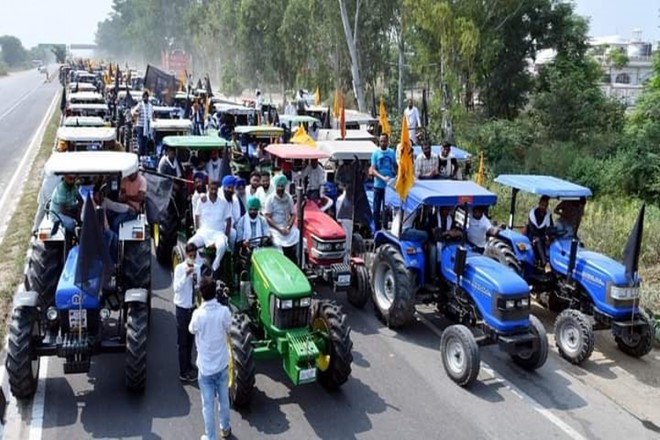 Famers unions across the nation have called for a 'Bharat Bandh' in view of the passage of contentious farm bills in Parliament. Congress, Aam Aadmi Party, Dravida Munnetra Kazhagam, Trinamool Congress and Rashtriya Janata Dal are among the 18 Opposition parties in support of the call for nationwide shutdown.

While Delhi-Haryana border is likely to be sealed, a three-hour road blockade will be observed across Punjab from 11am to 2pm.

The states that are likely to be completely affected by the bandh call are: Haryana, Punjab, Maharashtra, Telangana, Uttar Pradesh, Madhya Pradesh, Karnataka, Chhattisgarh, West Bengal and Uttarakhand.

As many as 31 farmer organisations joined the call for a complete shutdown in Punjab. Some farmers gathered across several locations to disrupt vehicular movement while the others held protest marches. On Thursday, farmer unions began a three-day 'rail roko' protest at six different locations in the state with 1,000 to 1,500 farmers sitting on the tracks at each protest site.

The Bharat Bandh call by farmer’s unions was in the protest against the Union government passing the three crucial and controversial agriculture bills. The Essential Commodities (Amendment) Bill, the Farmers' Produce Trade and Commerce (Promotion and Facilitation) Bill, and the Farmers (Empowerment and Protection) Agreement of Price Assurance and Farm Services Bill were passed by the Parliament earlier this week.

Farmers in Karnataka also protested against the 'anti-farmer', policies of the central and state governments today. A large number of ryots from various parts of the state arrived at the capital to take part in the demonstrations and register their protest against the amendments to the Agricultural Produce Marketing Committee Act and the Karnataka Land Reforms Act. A group of farmers also blocked the busy Tumakuru road near Yashwantpur in the city. The farmers were later taken away by the cops in buses.


Speaking against the farm Bills, Congress leader Priyanka Gandhi Vadra tweeted: The MSPs have been taken away from the farmers. They will be forced to become slaves through contract farming. Farmers will neither get the price nor the honor. They will become a labourer in their own land."

While farmers are protesting against all three bills, their objections are mostly against the provisions of the first. And while there is no uniform demand among the protesters or a unified leadership, it emerges that their concerns are mainly about sections relating to "trade area", "trader", "dispute resolution" and "market fee" in the first bill.