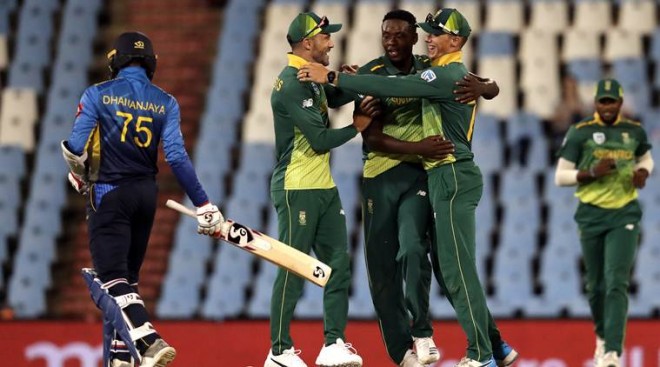 Centurion, March 7: South Africa lost 6 for 31 this afternoon, but the hosts' bowling attack then reversed the treatment to dismantle Sri Lanka's chase under lights at Centurion. Kagiso Rabada led the attack with 3 for 43 and Lungi Ngidi, Anrich Nortje and Imran Tahir all struck twice as the visitors collapsed from 92 for 3 to 138 all out in pursuit of 252. On a pitch that encouraged both seam and spin, South Africa had also been bowled out short of their full complement of overs, and were thankful for Quinton de Kock's 94 and Faf du Plessis' 57 as Sri Lanka's bowlers, led by Thisara Perera's 3 for 26 in his 150th ODI, also shared the wickets around.

Had Niroshan Dickwella and Avishka Fernando been able to set aside quick runs and simply survive Rabada and Ngidi's opening bursts, the job would only have become easier for Sri Lanka on a pitch that remained generally good for batting - cracks aside - throughout. But the visiting openers instead sought to go after the new ball, without much success.

Nortje didn't find the dry track at the Wanderers on Sunday much to his liking, but there was a little more pace in this pitch and he was off to the perfect start when he found the leading edge of Kusal Perera's bat with his first ball of the evening. While not quite as quick as Rabada, Nortje topped out at 148kph in his first spell, and also played his part in the field.

His direct-hit from the short third man found Kusal Mendis short of his ground and run-out for 24, with the batsman furious at the miscommunication with Oshada Fernando that brought his downfall. Oshada soon joined him in the dressing room, trapped lbw by Nortje with Sri Lanka in the mire at 92 for 5.

When de Silva chipped Rabada tamely to du Plessis at midwicket Sri Lanka were six down, and South Africa forced the issue by bringing in a slip and a short leg in and coming around the stumps at Akila Dananjaya. Imran Tahir then got to work on the lower order, a double-strike in his eighth over further denting Sri Lanka's chase.

Thisara Perera holed out to deep cover the ball after he had slogged Tahir onto the grass banks over midwicket, and Kasun Rajitha was pinned in front by a quick googly first ball. Rabada and Ngidi returned to deliver the last rites, with South Africa field-testing David Miller as a back-up wicketkeeper as the match reached a swift conclusion.

De Kock burst out of the blocks with four boundaries in the arc between backward point and wide long-off in Vishwa Fernando's first over. He thrashed 11 boundaries inside the first Powerplay, raising a 36-ball fifty - his 20th in ODIs and sixth against Sri Lanka.

Hendricks' departure in the 15th over barely slowed de Kock, and with back-t0-back boundaries off Akila he motored through the 70s. Then he took Dhananjaya on, plundering 15 from his second over of the innings. But with a 14th ODI ton in sight, he fell against the run of play to give Sri Lanka the opening they were searching for.