Every Indian is proud that brave Wing Commander Abhinandan Varthaman is from TN:PM Modi 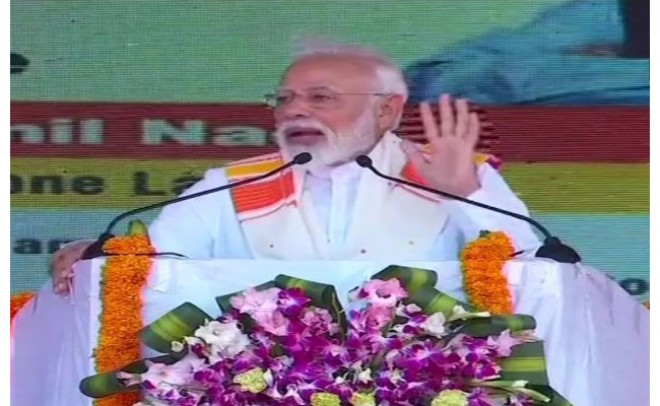 Kanyakumari,March1: Prime Minister Narendra Modi, addressing a BJP rally in Tamil Nadu’s Kanyakumari town, said every Indian is proud that brave Wing Commander Abhinandan Varthaman is from Tamil Nadu, following it up with the statement that he is proud that India’s first woman defense minister Nirmala Sitharaman is also from Tamil Nadu. This was the first time that the Prime Minister directly spoke about the IAF pilot who has been in Pakistani custody for the last two days.

The PM had made a cryptic reference to the IAF pilot on Thursday after his Pakistani counterpart Imran Khan made the announcement about his release. The Prime Minister, who was present at a science award function said, "You are folks who spend your lives in a laboratory and are used to conducting pilot projects. A pilot project is followed by scalability. Now a pilot project has been completed. Now we have to make it real. Earlier it was just a practice session".

Modi also accused the opposition parties of "going against India" and not supporting the country in its fight against terror. "Sadly, a few political parties guided by Modi hatred have gone against India...the world is supporting India's fight against terror but these political parties are against it," Modi said, adding, "The statement of these people are supporting Pakistan...the statements of these parties are being quoted in their media and parliament ..I want to ask them, do they support our armed forces or do they believe those forces who support terror on our soil?